Golden fields of sunflowers are set to become a more familiar sight in Canterbury, as the popular garden plant becomes increasingly sought after as a commercial crop. Better known as a colourful sun loving plant in the flower garden, sunflowers (Helianthus annuus) are also commercially grown for their oil.

Specially-bred varieties of sunflowers whose seeds produce high oleic oil, a high-grade cooking oil sought by commercial food manufacturers, are being trialled in Canterbury with the expectation of developing a new arable crop and food product for the region.

High oleic sunflower oil is at the high-value end of the cooking oil market, rather than competing with the big volume commodity oils palm and soybean. It is also a more healthy option than standard sunflower oil. Canterbury production is being driven by Rolleston-based processor Pure Oil NZ, which already produces cold pressed rape seed oil and has identified a demand for high oleic sunflower oil.
Pure Oil NZ managing director Nick Murney says it is not easy to establish a new crop for arable farmers.

“To grow and develop sunflowers as a main crop for New Zealand arable farmers will take a few years. We are only into year three”. “It took five to six years to lift rape seed yields to a level that made it attractive for growers.”

Imported sunflower hybrid cultivars Baltic and Idyllic have been trialled in Canterbury for the past two years to gauge crop yields and oil potential, with planting areas expected to almost
double again for the coming season.

From an initial 65-hectare crop in the first year, 150ha was harvested in April this year, with 250 to 300ha expected to be harvested next year. Turley Farms at Chertsey has trialled sunflowers for the last two years, including 43ha last year. The Foundation for Arable Research is assisting with the crop trials, aimed at understanding sunflowers’ yield potential, agronomy and the best way to harvest its seed. Planted in late November, the crop is harvested in late April.

“It establishes quickly and puts large tap roots down. It’s amazing how fast they grow,” Murney said. The colourful crop is known to be a traffic stopper and a popular backdrop for photos. 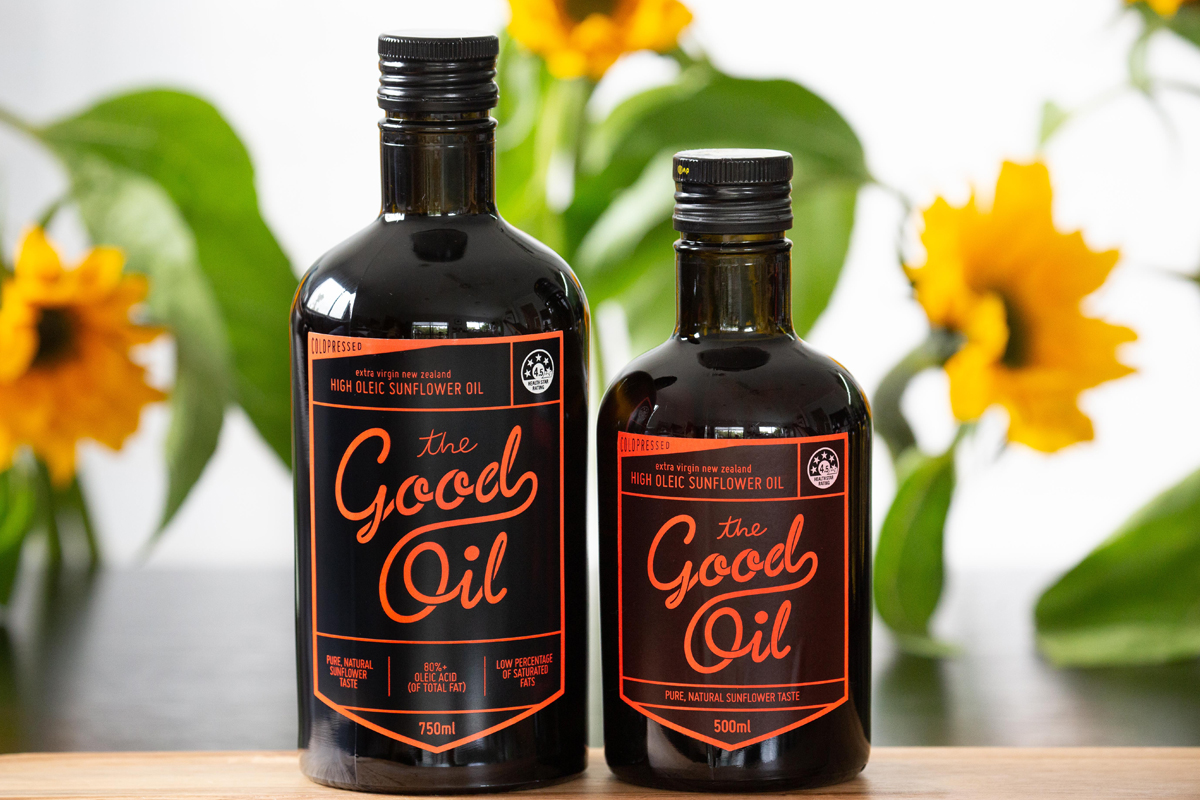 At the processing end, Pure Oil was also developing the optimal way to extract oil from the sunflower seeds, which requires a different technique than rape seed. “It’s critical to mechanically remove moisture through aeration and drying and storing of the seed in the right conditions is quite challenging, but we are learning how to do it,” Murney said.

“We are getting a good quality cold pressed sunflower oil.”

While overseas produced sunflower oils are normally heavily processed and lose their flavour, Pure Oil’s extra virgin cold-pressed method means it retains its mild, nutty taste. Murney said that tens of thousands of tonnes of sunflower oil was imported each year for use in infant formula, snack foods, baking and other foods.

Pure Oil’s limited volumes means it will first retail the product under The Good Oil brand, before supplying food manufacturers. It is expected to go on sale in the coming weeks at New World supermarkets and specialty stores. It already retails its cold-pressed rape seed oil under the same brand. The protein-rich husk left after the oil-extraction process is sold as a stock feed to milking goats and horses.

As a short duration crop, sunflowers were a double crop option for some arable farmers. Sunflowers could be grown in Mid Canterbury as they do not clash with high-value brassica seed crops. This is in contrast to Pure Oil’s oil seed rape production, which was predominantly grown in South Canterbury and Southland to avoid unwanted cross pollination with other yellow flowering brassica seed crops on the Canterbury Plains.

Challenges in growing the crop were limited access to imported hybrids and a limited range of suitable herbicides. There was also a lack of specialised equipment planters and headers), as well as a huge potential for bird damage. To “outrun the birds”, crops were harvested just before fully mature, with aeration used to dry the seed to required moisture levels. Murney said.

Sunflowers are also grown for commercial bird seed, but these are different cultivars.